The first projection shows Rita, the artists’ daughter, as she is filmed by her father. The 16mm film captures a lightning storm on the Mediterranean Sea.

The work is situated in the basement floor of the National Socialism Documentation Centre in Munich. The lightning bolt—a symbol of power used by the SS—signifies here the electricity control panel on the door that shields it. The projection on this door alongside the sequence of the artists’ daughter underlines the assumption of power through the appearance of light; and how thresholds (like the screen, the camera, the door etc) maintain power relations.

The work was commissioned by NS Dokuzentrum, Munich for the exhibition Tell me about tomorrow at NS Dokuzentrum Munich 2019-2020. 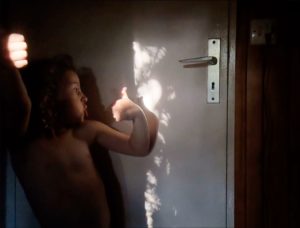